The Skipper CCD concept was proposed in the early 1990's, but has only recently been realized. We can now precisely count each individual electron in each pixel of a large CCD consisting of millions of pixels. This is irrespective off whether the pixel contains only zero or one electron, or if it contains more than 1000 electrons.

The SENSEI CCD sensors were developed at Lawrence Berkeley National Laboratory MicroSystems Lab as part of the LBNL Laboratory Directed Research and Development Program. The prototype sensor are 200 μm thick and is composed of 15μm×15μm square pixels arranged in a 4126 × 866 array. 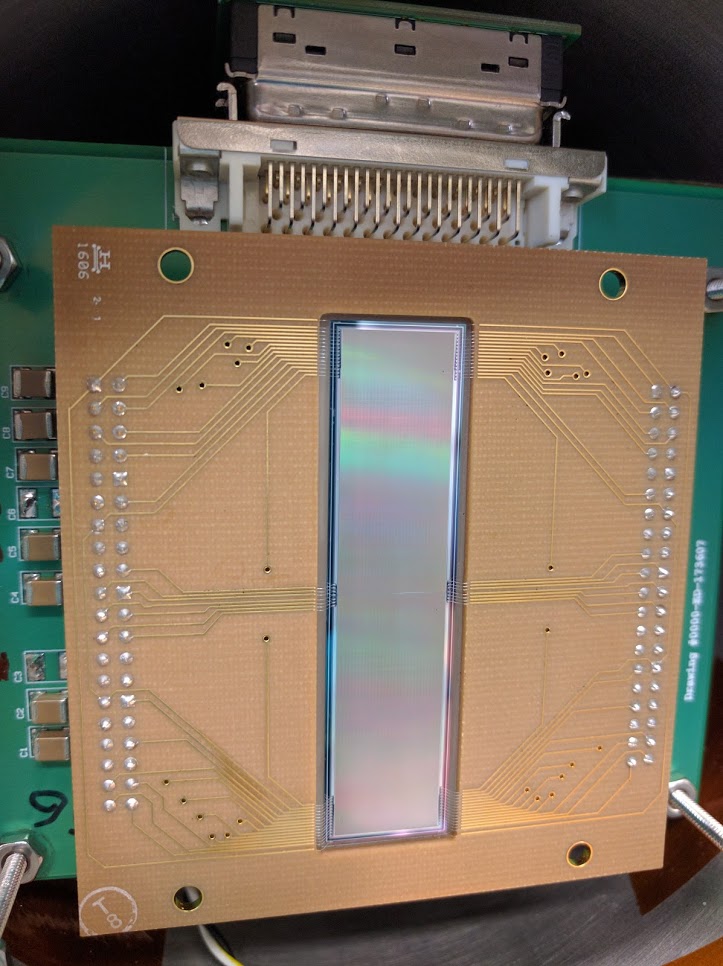 The figure above shows a simplified diagram of the Skipper CCD output stage. At the begining of the read, all the charge is drained from the sense node (SN), then the summing-well gate (SG) phase is raised to transfer the charge packet to the SN and conclude the readout of the first sample. To take the second sample, the output gate (OG) and SG phase are lowered moving the charge packet in the SN back under the SG phase and the reference voltage of the SN is restored applying a pulse to the RG. This cycle can be repeated to sample the same charge packet multiple times.

The readout noise decreases with the number of non-destructive samples taken.

Black points show the standard deviation of the empty pixels distribution as a function of the number of averaged samples. The red line is the theoretical expectation assuming independent, uncorrelated samples. The number of readout samples can be dynamically configured on a per pixel basis.

A primary goal of particle physics research today is to identify the microscopic nature of the dark matter that makes up 85% of the Universe’s matter. Hidden-sector dark matter (including axion-like particles) with eV-to-GeV masses is a rich but remarkably under-explored possibility that has received increased attention in the last few years. Moreover, several theoretical scenarios make firm experimental predictions. New ultra-sensitive detectors are required to probe these models.

SENSEI’s ability to precisely count the number of electrons in a pixel has a significant and immediate impact on searches for rare events. For example, dark matter can scatter off bound electrons in the silicon CCD, creating one or more free electrons. SENSEI can measure these tiny depositions of electric charge in each pixel allowing for unprecedented sensitivity.

The figure below shows one striking example, in which interactions between dark matter and electrons are mediated by an ultra-light dark photon. A 1-gram detector taking data for only 2 hours will already probe unexplored parameter space beyond XENON10/100 (blue shaded regions). A 10-gram detector running for 10 days will probe a compelling theory target in which dark matter interacting with an ultralight mediator (mass << keV) obtains the observed relic abundance through “freeze-in” (thick green line), while a 100-gram detector will probe this theory target over five orders of magnitude in mass.

A few more examples are given in the figure below, where SENSEI’s reach is shown with red lines. Here the various orange lines denote four theory targets in parameter space where dark matter can obtain the observed relic abundance:

Other dark matter candidates can also be probed by the SENSEI detectors. We refer interested readers to references in the Additional Material.

Skipper CCD technology will impact other scientific areas and enable:

The SENSEI team collaborates with many of these projects.

Other papers on direct detection of sub-GeV dark matter